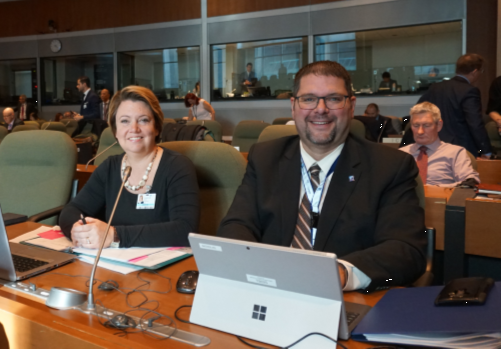 Representatives from ACI World recently concluded the 29th ICAO AVSEC Panel from 19–23 March 2018 in Montreal.  With 45 different working papers presented, the Panel discussed a wide range of subjects, from insider threats to the new Global Aviation Security Plan (GASeP). As a permanent observer to the Panel, ACI advocated for the interests of our airport members to ensure sustainable, risk-based, efficient and effective security operations.

ACI presented updates on the Smart Security programme and highlighted some of its achievements and activities for 2017, asking States for ongoing support for the programme.  The paper was well received: the Panel strongly encouraged the programme to continue and recognized the value of industry and states working together.

As a contributor of GASeP, ACI presented some key activities undertaken in the past year, such as development of a handbook on landside security, new training courses and ACI Airport Excellence (APEX) in Security. The Panel was appreciative of the work ACI has been doing to support the GASeP and encouraged States to continue to work with industry.

An ACI paper was presented looking at improving technological resources and fostering innovation, highlighting that not all solutions are applicable or practical in all airport environments. The paper asked States to promote outcome-focused approaches when implementing new and enhanced measures. The panel agreed that not all measures are suitable for all types of airport operations and recommended that States should allow for a range of measures suitable for specific operational environments, provided they have equivalent outcomes.

The Panel reviewed proposals for new Annex 17 Standards to address insider threat. There was broad agreement on some proposals, such as the screening of staff using methods capable of detecting explosives (in line with passenger screening).  However, there was much discussion on a new standard for 100% screening of staff. While a number of States supported this change, others believed that the current Standard was sufficient, and that States should be able to determine their own measures provided they reached the same security outcome. The question was not resolved will be subject to further discussion.

Cyber security continued to be a topic of debate.  In collaboration with other Panels, ICAO will determine the best course of action with a goal to develop an organization wide strategy on cyber security.  ACI will monitor progress on this and will be actively participating in any work related to this matter.