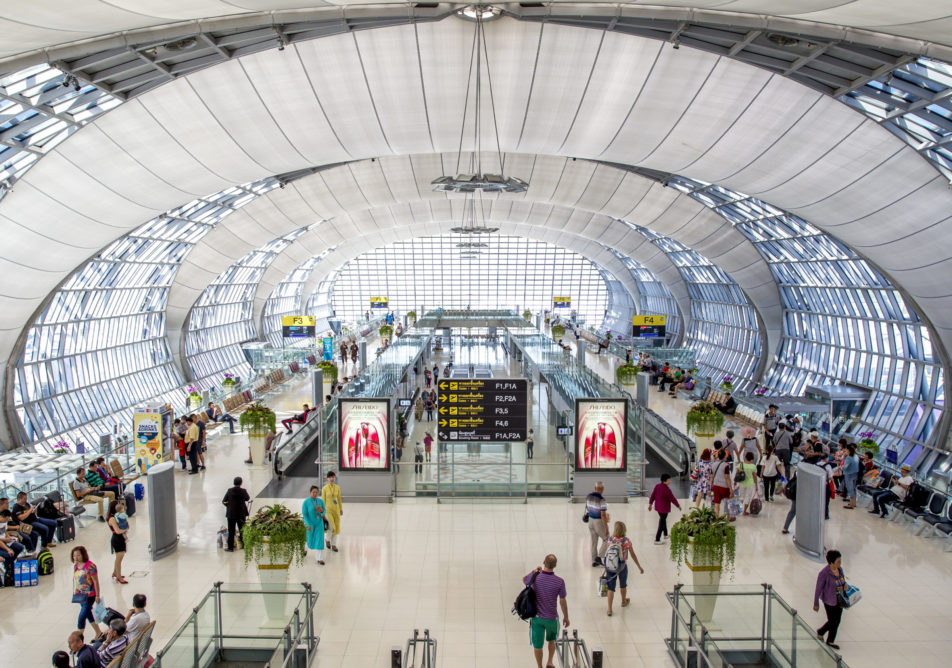 Many airports around the world could be considered gateways to their countries. They are the first impression that many travelers have of the destination, and as such often impart a distinct sense of place. In addition to fulfilling this role, it should also be remembered that airports are a vital part of the international aviation industry—complex pieces of infrastructure that must ensure the safety of travelers while providing them with an unparalleled passenger experience.

All of these airports play important roles as gateways to Asia. With their advantageous locations in each region of the country, these airports work well as regional hubs for passengers connecting from neighboring countries.

With its 563,000 square meter space, Suvarnabhumi International Airport is ranked as the world’s third-largest airport by physical space. Moreover, the airport has focused on implementing state-of-the-art technology to better serve passengers. For example, the airport has installed 53 information kiosks for passengers to easily check information on flight schedules, terminal layout plans and retail stores.

Equipped with a variety of facilities, the airport offers affordable prices and rapid service. Domestic passengers can generally board within 30 minutes and international passengers can board within one hour. The airport also provides automated passport checks for Thai nationals and assigns “Airport Help” staff to communicate with tourists, particularly Chinese travelers.

In the north of the country, Chiang Mai and Mae Fah Luang-Chiang Rai International Airports function as the gateway to Indochina. These two airports welcome travelers to the fascinating land of Lanna heritage, which is surrounded by beautiful nature and a magnificent culture.

Another important role of Chiang Mai International Airport is to serve the economic growth of the north. The airport is located only 7 kilometers from the city, making for a quick trip downtown. In 2016, Chiang Mai International Airport was awarded third place in the “Best airport by size – 5 to 15 million passengers” category in the Airport Service Quality (ASQ) survey.

Mae Fah Luang-Chiang Rai International Airport is a small airport but no less important as a vital element of Thailand’s overall air transport industry. The airport proudly presents a warm and welcoming atmosphere to passengers as they arrive in a city renowned for its nature, arts scene and culture. In the future, the airport will play another important role as a Regional Center for Aviation-stated business, and is also expected to accommodate travel from the fast-growing CLMV countries and the South China Region.

Hat Yai International Airport is located in the Songkhla Province, which is an important economic and educational zone of the country in the southern part of the country. The airport plays a major role in supporting five neighboring provinces, including Songkhla, Sutun, Narathiwat, Pattani and Yala, as well as Malaysia.

It is with great pride that AOT operates six international airports in Thailand, each with their own particular strengths and areas of focus. Despite their respective roles within the country’s aviation system, all six have an overarching goal of connecting travelers, whether to other parts of Thailand, to the continent at large or two the rest of the world.