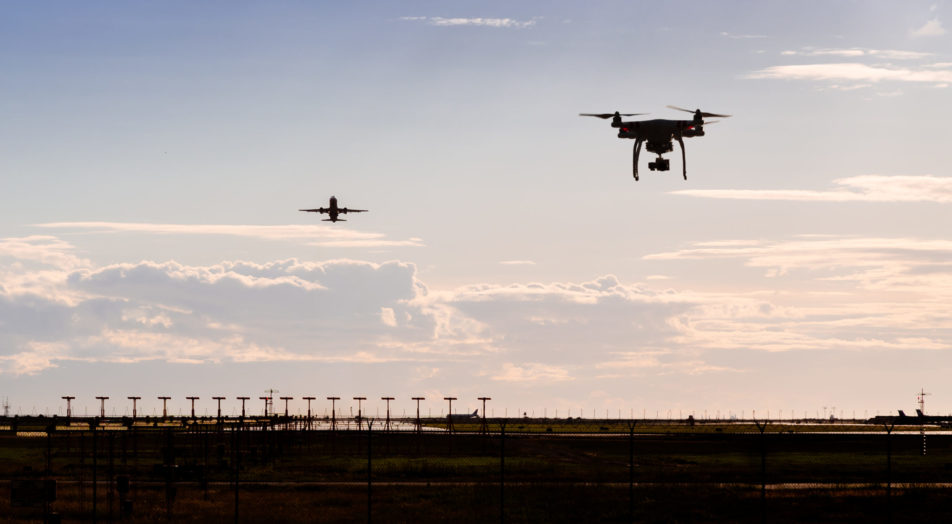 Drones and airports: When things can go wrong

Consumer and commercial grade drones have been rapidly rising in popularity in the last five years. According to the US Federal Aviation Administration forecasts, seven million drones are expected to be sold in the US alone by end of this year. Drones do not require any registration, as they are largely treated as toys or consumer electronics – and sold in same type of stores. The positive uses have been many, including aerial imaging, film making, real estate and construction, surveillance of critical infrastructure in remote or dangerous locations, and of course recreational use. But what about the other side?

The dark side of drones

Drone technology has evolved at breath-taking speed. A $1,000 device weighing only 2kg can fly 7-10km, is equipped with sophisticated GPS navigation and obstacle-avoidance sensors, can carry high quality cameras on stabilised gimbals, and carry 250g of weight. This doesn’t sound like much, but is potentially lethal when the package is an explosive. A higher budget of $10-$20,000 will buy a high-spec drone designed for long-distance flights on an automatic navigation setting and high payload capacity. This could be used for spraying crops but a nefarious substance like a chemical or biological agent can be loaded in just as easily.

In an airport setting, drones are a significant hazard. When a drone is sucked into a jet engine, for instance, the metal or plastic device with high-capacity batteries has the potential to cause far more damage than that created from a bird strike.

A drone coming into contact with a fast-moving plane, can damage the body of the plane or the windshield. Today, airports shut down flights when a drone is sighted for precisely these reasons – like the well-publicised Gatwick Airport shutdown in December Christmas 2018. The Gatwick incident was reported to affect 140,000 passengers with 1,000 flights diverted or cancelled and reported cost of GBP$50-$75 million to the airport and airlines.

So who would fly drones around airports? Industry experts call it the three C’s – those that are careless, clueless or criminal. The first two arise when the drone pilot is either careless or unaware of the danger their drone poses to the airport. Some plane-spotters love using drones to get closer footage of aircraft, for example. But then there those that which to deliberately cause disruption or damage which is made more possible by the airport’s difficulty in detecting and disabling unauthorized drones.

So, what can an airport legally and prudently do to minimize the risk of drone disruptions? Drone detection technology today has evolved from detection and tracking drones in real time.

Nowadays, technology can approximate a drone pilot’s location. Now the pilot can be apprehended without having to bring down the drone.

These measures are subject to the development of local regulations and standards for the operation of drones, within a framework that promotes the safety of all aircraft sharing the skies.

Airport operators can be informed and active in decision-making with government, regulators, local law enforcement agencies, and aircraft operators to develop and publish procedures that suit their local conditions.

What’s next for drones?

It’s inevitable that drone attacks will continue to proliferate, grow in sophistication, and intensify. As the industry is still relatively nascent, it is important to identify the threat scenarios and familiarize ourselves with reputable providers  and when possible, trial the products.

Oleg Vornik is the CEO of DroneShield (ASX:DRO), a world leader in counterdrone solutions. He is an experienced senior executive with experience at the Royal Bank of Canada, Brookfield, Deutsche Bank and ABN AMRO. Prior to becoming the CEO of DroneShield, he was its Chief Financial Officer. He holds a BSc (Mathematics) and BCom (Hons) from University of Canterbury, New Zealand and has completed a business program with Columbia University in New York. Vornik has led DroneShield for approximately 5 years, from the early start up stage, through its IPO and to growth to over 100 countries globally today.