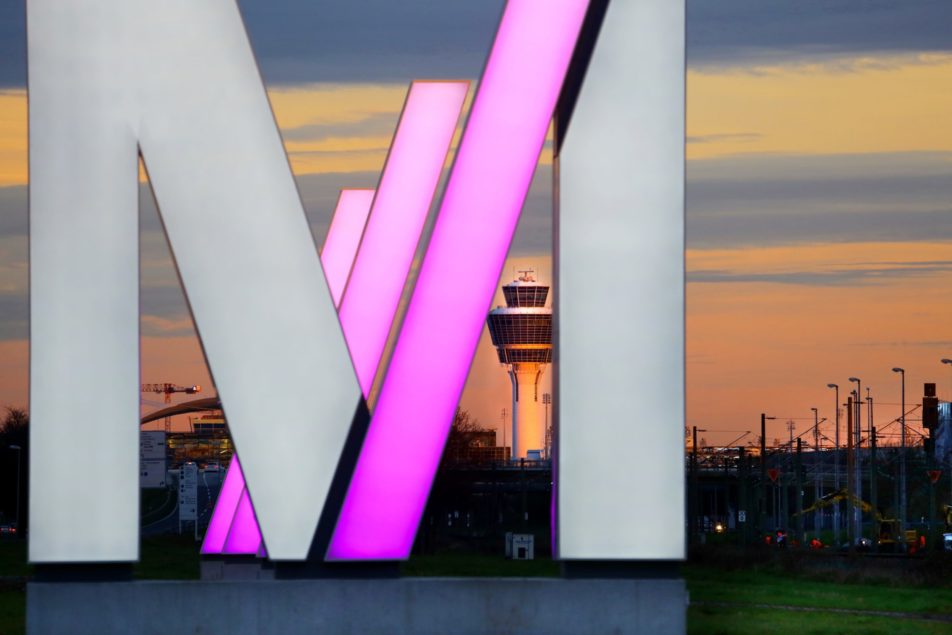 Munich Airport will celebrate a big anniversary on 17 May 2017: the airport’s official opening a quarter of a century ago marked the beginning of an enduring success story. Since 1992, the once mainly regional airport has risen to take its place alongside Europe’s leading air transportation hubs.

“Being honored as the first five-star airport in Europe by the London-based Skytrax Institute is a thrilling accolade and a testament to our service and the high-quality passenger experience we provide,” said Dr. Michael Kerkloh, President and CEO of Munich Airport. “Our goal must now be to maintain our excellent quality standards and continue expanding the services we offer travelers.”

The airport’s history has been marked with a series of milestones. Among the most recent is the opening of Germany’s first midfield terminal in April 2016. The 600-meter long building expands the airport’s handling capacity by 11 million passengers per year and takes the retail and dining options, as well as overall passenger comfort, to a new level.

In terms of environmental impact and energy efficiency, the “green terminal” sets new standards for the airport industry. Environmental stewardship is one of Munich Airport’s top priorities, evidenced by a strategic target of becoming Germany’s first airport to achieve carbon-neutral operations by 2030. To meet this ambitious goal, the airport plans to cut CO² emissions by 60% and offset the remaining 40% through compensatory measures in the surrounding region.

The latest milestone in the airport’s dynamic development was Lufthansa’s decision to station 15 Airbus A350 jets in Munich. Serving long-haul routes with these advanced widebody jets will result in enormous reductions in fuel consumption, emissions and noise, corresponding with the airport’s strategic climate protection targets.

A quarter-century of growth and more to come

By May 2017, the total number of passengers arriving, departing or connecting at Munich Airport since it opened will top the 700 million mark. The annual traffic volume of over 42 million passengers per year has more than tripled since 1992, and the number of take-offs and landings has doubled to approximately 400,000. Over the past 25 years, Munich Airport has handled around 8.5 million flights.

For the future, all of the indicators point to continuing growth. With the start of the 2017 summer timetable, the Lufthansa subsidiary Eurowings will have four Airbus A320 airliners newly stationed in Munich and will offer 89 flights per week to 30 attractive destinations in Europe. The airport has big celebrations planned for its upcoming 25th anniversary, with events scheduled daily from May 18 to 21, including a music festival, an exhibition and welcoming thousands of visitors to a cordoned-off section of the apron where many modern and vintage aircraft will be on display. And for an excellent view of all the action at the airport, an 18-meter-high Ferris wheel will be set up on the festival grounds. The celebrations will begin on May 17with a campus party for the airport authority’s 9,000 employees, as well as the other 26,000 people working for partner companies on the airport premises.

A great place to work

With their hard work and commitment, the employees have played a decisive role in Munich Airport’s success. The airport management team understands the enormous importance of a motivated and competent crew, and has therefore made it a top priority to create and develop attractive jobs. In a study by the news magazine Focus, Munich Airport’s operator, Flughafen München GmbH  (FMG), was placed in the top category for employers in the transportation and logistics sector in Germany.

The company is well aware of its responsibility for the success and satisfaction of the staff and makes substantial investments—for example in measures to help employees with their work-life balance—to this end. Focus ranks employers in cooperation with the Xing business network and the employer ranking portal kununu, and Munich Airport ranked number one among employers in the transportation sector in 2016 as well.

“I’m delighted that we were able to defend our top spot in 2017 despite the increased competition,” said Dr. Kerkloh. “This recognition will enable us to boost our nation-wide image as an attractive employer.”

The study received responses from more than 100,000 employees in a wide range of industries under various categories including opportunities for advancement and the “feel-good factor” in the workplace. Another key question was whether employees would recommend their company to others. In that regard, the respondents had high praise, especially for the working atmosphere at Munich Airport, the team spirit among colleagues and the strong emphasis on a healthy work-life balance. For Dr. Robert Scharpf, Senior Vice President, Human Resources, the repeated honor as a top employer is also the result of the company’s consistent attention to employee interests: “For us, the impressive rankings from employees are an important way of telling us that our HR policy is on the right track,” he said. “We will continue to consider the impact on our workforce in all issues addressed by the airport’s management team.”

Complementing its reputation as a great place to work, Munich Airport has also become a magnet for apprentices and trainees. In recent years, thousands of young people have used the airport as the launching pad for their careers. The company offering the most training opportunities is FMG itself. At the beginning of this year, 144 apprentices and co-op students received qualifications in 12 different occupations. In a study by the German financial magazine Focus Money, FMG was rated among Germany’s best workplaces for trainees for the second year in a row.

Of the 5,000 companies contacted for the survey, 413 were honored with that seal of approval. The repeated honor can be attributed to the high quality of the airport’s training management. The young apprentices with FMG have seven trainee coordinators at their disposal. In the various departments where they are assigned for training purposes, they have the support of around 250 part-time trainers and instructors. Along with the unique atmosphere of a major international aviation hub, the airport offers outstanding training conditions thanks to its state-of-the-art technologies and a wide range of additional activities and programs. A big hit with the airport apprentices and trainees is the opportunity to take part in exchanges with partner airports in Europe for several weeks.

“We make substantial investments in vocational training, offer premium quality opportunities and as a result benefit from above-average grades achieved by our young people in their various programs,” explained Theresa Fleidl, Vice President, Professional Training Policy and HR Marketing, Munich Airport. “That’s why all of them have a very good chance of being taken on full time after completing their training—simply because the airport needs the best young talent.”

Within the context of the anticipated 25th anniversary of the airport, the in-house “Munich Airport Academy” should not go unmentioned. It will join the celebrations as both recognition of past achievements and preparations for a new, inspiring future. The Academy also plays an essential role in supporting the growth of the entire airport community, providing employees with the tools they need to succeed. The Academy collaborates closely with ACI, and Munich Airport will be hosting the Airport Executive Leadership Programme (AELP) from 7 to 12 May 2017. Developed through the partnership between ACI and the John Molson School of Business within the John Molson Executive Centre (JMEC) at  Concordia University located in Montreal, Canada -, the programme provides airport executives with an unparalleled opportunity to connect with peers in a dynamic, business-like setting and enhance their leadership and strategic decision-making skills.

The course spreads across several weeks of classroom and blended learning modules, aiming to develop industry leaders by fostering professionalism in airport management practices. A number of selected staff members from Munich Airport will be taking part in the programme, proving their potential and leadership attributes, first in the classroom, then in their respective work areas. “We strongly believe that through their participation in the AELP, our colleagues will not only enhance their knowledge and skills, but also become empowered leaders who are able to drive positive transformational change within our organization, thus further raising the profile of Munich Airport worldwide,” said Magdalena Sokol, Director, International Training and Consulting.