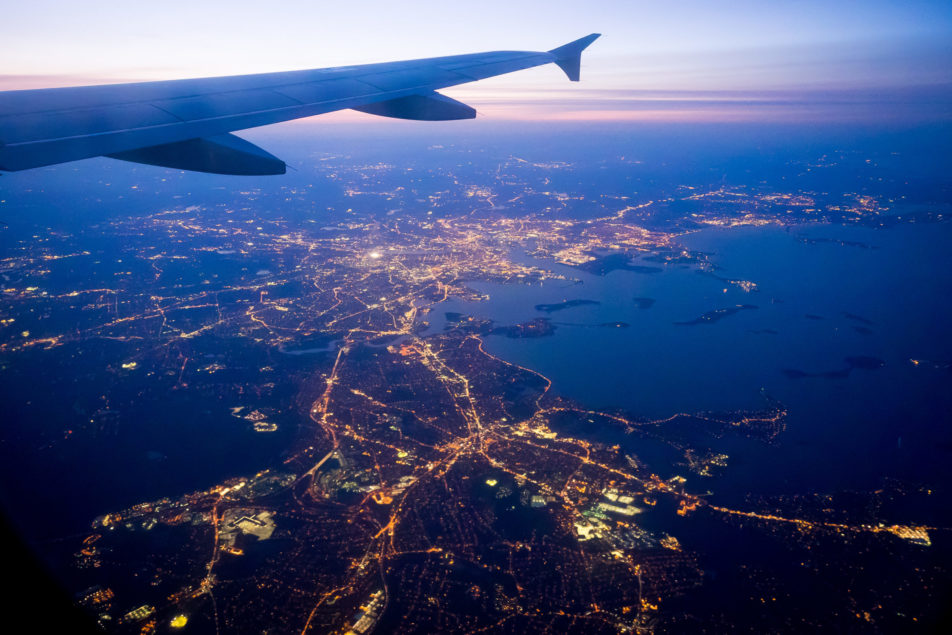 The eastward shift and the world’s fastest-growing airports

Even with the strong gains made by smaller airports, the world’s largest hubs continue to make strides. While there were 16 airports with over 40 million passengers per annum (mppa) in 2008, this number had risen to a total of 54 airports by 2018. Collectively, these airports achieved a year-over-year passenger traffic growth of 5.1% in 2018. This level of growth is unprecedented, particularly since a significant proportion of the airports in this category are in the mature markets of North America and Europe.

The Asia-Pacific region, which is home to many emerging markets, has the largest share of hub-airport traffic, with 23 airports of more than 40 mppa. North America follows, with 17 mega-hubs (see Chart 1). In 2018, the 17 North American airports with over 40 mppa provided 31% of total large-hub traffic worldwide. Asia-Pacific’s large hubs have a 42% share of global traffic.

Most of the world’s fastest-growing airports are located in emerging markets, a significant proportion of them being in the Asia-Pacific region. Table 1 presents the fastest-growing airports with over 15 mppa in 2018.  As many as 12 of the fastest-growing top 30 airports in 2018 are located in either China or India. 5 of the top 30 are Indian. India’s move towards a more liberalized aviation market and the nation’s strengthening economic fundamentals have helped it become one of the fastest-growing markets with its traffic growing rapidly in a relatively short time. Bangalore (BLR) and Hyderabad (HYD), two fast growing hubs in India saw traffic jump up by 29.1% and 21.9% respectively, occupying the 1st and 3rd rank. Antalya International Airport (AYT), a major gateway to Mediterranean tourism and resorts in Turkey, saw traffic jump 22.1% in 2018 to place it in second rank after experiencing depressed traffic figures in 2016.

Major Russian airports experienced significant gains in traffic following on the economic recession they experienced in 2016. Airports also received a boost in traffic numbers as a result of the FIFA World Cup, which took place in Russia during the summer of 2018. Vnukovo International Airport (VKO) and Sheremetyevo International Airport (SVO), two airports serving the Russian capital, Moscow, saw traffic leap by 18.4% and 14.3% respectively in 2018.  Pulkovo Airport (LED), a smaller hub serving St. Petersburg, experienced an increase of 12.4% year-over-year as compared to 2017.

Rockford (RFD), an expansive air cargo hub in the Midwest United States, was the fastest-growing airport in 2018 for airports that handled more than 250,000 metric tonnes of air cargo. Positioning itself as an e-commerce freight hub for Amazon, the online retail giant, the airport’s traffic grew 56.6% in 2018 (see Table 3).

Cincinnati/Northern Kentucky International Airport (CVG), located in the Midwest U.S., grew 41%, for the period from 2008 to 2018, as Table 4 shows, making it not only one of the fastest-growing airports for cargo but also among the world’s largest in throughput (ranked 27th in the world in terms of air cargo volumes). Amazon, the online retail giant, has chosen this airport as a key hub in developing its distribution channels in tandem with CVG’s air cargo facilities. Other notables include Zengzhou (CGO), Ha Noi (HAN), Doha (DOH) and Istanbul (ISL), which all achieved double digit growth. As many as 20 out of the 30 fastest growing airports are located in the Asia-Pacific region with 10 of them located in China alone.